Since this is a homage to my theatre family all over the world, I’ve decided to write in English for once.

About a year and a half ago I was on tour with a great group of people. We were traveling Europe with a brutally exhausting but amazing show. And then I fell ill. I figured it was the flu and I was just tired. My resistance was low and therefore this flu seemed harder to beat than previous variations had felt. I was wrong.

Live entertainment is a highly seductive field. More often than not you work insane hours and the contractor works you to the bone. A fair amount of times this will also mean that you will not be at home with your friends and family on important days, such as birthdays, weddings, holidays. Heck, you’ll often be away from home for a long period of time, maybe not even in your own country or on your own continent.

The thing is: you are not alone. With every show, even if it’s just for a short period of time and when you will sleep in your own bed, bonds are formed at a level that is incomparable to most other professions. Somehow in theater you eat, sleep, drink and dream a production until every fiber of you is part of it. Your coworkers have the same and this creates a theater family, where you will always have a black sheep, a weird uncle, a mater/pater familias, and occasionally a falling out. But you are not alone and your family has got your back.

Mankind is prone to want to form tight knit relationships in a societal form. Theater is a pressure pan in which these are forged at an incredible rate. Together with the thrill of live entertainment, it makes that theater families are all in, under all circumstances. And it’s a kick. 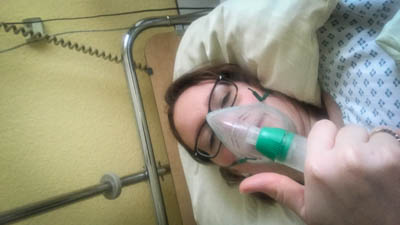 With that ‘flu’ I ended up in the hospital. First with an pneumonia, and a few weeks after with a devastating auto-immune disease. I was unable to walk, could hardly use my arms. My muscles were killing me due to painful spasms, mostly in my back and face. I was no longer able to eat, since my esophagus was partially paralyzed. And the doctors were worried about my lungs, that seemed to go the same way.

Obviously I was temporarily replaced at the tour, but since I knew everything that was going on, I continued to help out from my hospital bed. I felt I could beat this thing and return in no time, since I was still working from the hospital anyway. The doctors told me it would be a process of about two years before I would go back, but I did not accept, it just didn’t hit me. And all of a sudden, it did. In one title wave  the realization that I would not be able to go back hit me and truly devastated me. It was the only time I cried. No, I wailed.

I was not done. Yes, we had an amazing show, but people were exhausted. I was streamlining processes, working hard to make lives easier. There were so many things I still wanted to reach for ‘my’ people. And now I was not able to finish those. I was unable to protect them, keep them safe, to help them through the rough times coming. My body was failing me, but the only thing I felt was that I was failing them.

About a year and a half ago I was on tour with a great group of people.  We were traveling Europe with a brutally exhausting but amazing show. And then my world stood still.

This year the world stood still for all live events. Even though officially some parts are open, by far the most productions have been canceled. Companies have gone bankrupt, freelancers no longer have assignments. My entire theater family has had the devastating blow that they will probably not be able to do what they love any time soon.

Even though we are worlds apart, I feel you. I miss you. And I assure you that as long as we keep theater in our hearts, we will return stronger than we have ever been. As always, we’ve got this. #StillAlive.